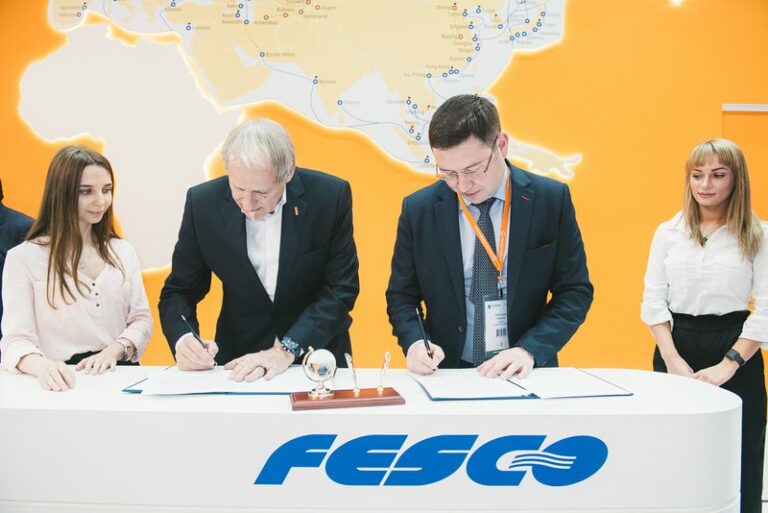 During the logistics trade show TransRussia 2018 that took place last week in Moscow, the Swiss InterRail Group and Russian transport and logistics services provider FESCO signed a joint memorandum of understanding on April 18.

Both parties agree to cooperate on developing joint transport services on the China-Russia-Europe and Europe-Russia trade lanes in both directions. In the long term, the agreement also includes block trains on selected routes. The objective of the joint activities is to better tap the economic potential of the regions in question.

“With FESCO, we have found a strong partner in Russia that allows us also to cover the Russian transit corridor. We can contribute our customized container block train traffics in Europe to increase the transport volumes with China”, says Hans Reinhard, President of the Board, InterRail Holding AG.

“Our company is interested in further augmenting transport volumes along the corridors across Russia. The cooperation with InterRail lets us set up an efficient supply chain along this route by balancing goods flows in both directions and thus aiming for optimal capacity utilization of the rolling stock used”, comments FESCO President Alexander Isurin.
InterRail at a glance:
The InterRail Group, registered in Switzerland, is an international transport group with a focus on rail freight, and the owner of rolling stock and containers. As the operator of container block trains between Europe and Asia, InterRail has the specific knowhow for the transport of conventional and containerized cargo from and to the countries of the Commonwealth of Independent States, as well as in CIS transit. InterRail has direct contracts with all national railway companies in the CIS. Among others, the service portfolio includes end-to-end freight rates, documentation, pre- and on-carriage for rail traffics, tracking and tracing as well as container provision.