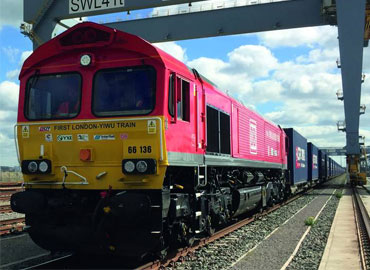 The first train from London to Yiwu, China, started yesterday. This time also, the InterRail Group, based in Switzerland, is the operator of the train. It was dispatched from the DP World London-Gateway. The train consists of 32 containers loaded with British whiskey, soft drinks, vitamins, baby food and pharmaceuticals. The train will travel approximately 12,000 km through the Channel tunnel, France, Belgium, Germany, Poland, Belarus, Russia and Kazakhstan and will arrive in Yiwu on April 27th. The first train from China arrived in London just three months ago on January 18th. This new train service, too, is owed to the Chinese government’s «One Belt – One Road» initiative, which has triggered, over the past few years, enormous growth in rail traffics via the Eurasian land bridge.

For several years already, InterRail has been active as a leading operator of trains between China and Europe; especially during the past 24 months, the company added new products and trade lanes to its portfolio. Among them are open trains that can be loaded with single containers or container groups, but also LCL traffic from China to Europe as well as the freight transport on board special wagons between Russia and Central Asia.