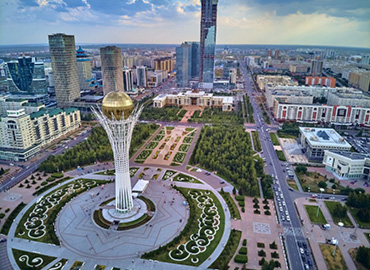 InterRail with branch office in Nur-Sultan

InterRail Kazakhstan LLP, an Almaty-based subsidiary of InterRail Holding AG, Switzerland, has converted its former sales office in Nur-Sultan into an operational branch as of the end of January 2021.

St. Gallen, February 3, 2021. InterRail Kazakhstan LLP, an Almaty-based subsidiary of InterRail Holding AG, Switzerland, has converted its former sales office in Nur-Sultan into an operational branch as of the end of January 2021.

The office is headed by Bekzat Madiyarova; she has been working as sales manager for InterRail Kazakhstan in Nur-Sultan since the end of 2018.

The company offers containerized as well as conventional rail freight services in import, export and transit and has a direct cooperation agreement with Kazakhstan Railways (KTZ). The rail services are complemented by multimodal solutions and the provision of appropriate rolling stock. This includes special wagons such as hopper wagons and open-top wagons for bulk goods.

For the InterRail Group, Kazakhstan has always been a key market due to its importance as a bridge between Europe and Asia. The expansion of the local network is therefore a logical consequence of the InterRail Group’s geographic strategy.

InterRail at a glance:

The InterRail Group, registered in Switzerland, is an international transport group with a focus on rail freight, and the owner of rolling stock and containers. As the operator of container block trains between Europe and Asia, InterRail has the specific knowhow for the transport of conventional and containerized cargo from and to the countries of the Commonwealth of Independent States, as well as in CIS transit. InterRail has direct contracts with all national railway companies in the CIS. Among others, the service portfolio includes end-to-end freight rates, documentation, pre- and on-carriage for rail traffics, tracking and tracing as well as container provision. InterRail operates its own offices in Belarus, China, Germany, India, Kazakhstan, Poland, Russia, Switzerland, Ukraine and Uzbekistan.