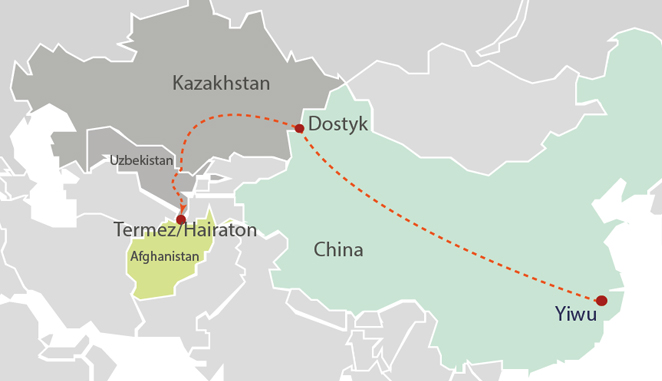 InterRail, an international rail freight provider registered in St. Gallen, Switzerland, has added another destination to its traffics ex China: In close cooperation between the InterRail offices in China and Uzbekistan and the railway companies involved along the route, InterRail now offers block train traffics ex China to Afghanistan. The new product was launched in late August.

The first test train left Yiwu on the Chinese Eastern coast for Hairaton in Northern Afghanistan in late August. In a transit time of nine days, it covered the 7,500 km trip from China via Alashankou/Dostyk – where the containers are trans-loaded from normal to broad gauge tracks – on through Kazakhstan and Uzbekistan to its destination. In the meantime, a second train has reached Afghanistan. Three more trains are scheduled to run in the course of the next three weeks; by year’s end, a regular traffic with at least one train per week is to be established. This new train connection, too, is owed to the “One Belt – One Road” initiative of the Chinese government, which has triggered enormous growth in rail traffics along the Eurasian landbridge over the past few years.

A leading train operator between China and Europe for a number of years already, InterRail added, especially these past 24 month, new products and routes to its portfolio, among them open trains to be loaded with single containers or container groups, but also LCL traffics ex China to Europe, as well as special wagon services between Russia and Central Asia. Geographically, InterRail launched new railway connections ex China to Central Asia and Russia.  In offering such products and setting up new routes, InterRail benefits from the well-developed network of the TransInvest Group with its strong presence in Russia, the CIS/Central Asia and China.

“This new block train connection between China and Afghanistan once again confirms the huge potential of the Eurasian landbridge. But we are aware, at the same time, that further improvement is needed, such as offering clocked departures according to schedule, enforcing a further reduction of transit times, introducing homogeneous IT structures for faster handling, as well as creating attractive models for empty container return”, says Hans Reinhard, Chairman of the InterRail Group.