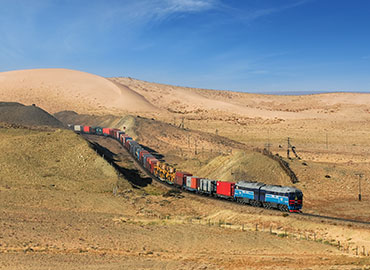 InterRail train service from and to Uzbekistan has become firmly established

After eleven months, InterRail can draw a positive conclusion: The rail service from the Russian Port of Nakhodka-Vostochny to Uzbekistan and vice versa, which was launched in March 2018, registers growing demand and has thus successfully passed the trial phase. The connection has already been extended to include another (third) block train, so that now a departure can be offered every ten days in both directions. Transit time is between eleven and twelve days.

On this service, the Russian InterRail subsidiary cooperates closely with the colleagues in Uzbekistan, organizing the leasing of wagons, doing port handling, freight invoicing and putting the block trains together.

Increasingly, demand for this train service comes from Asian countries such as South Korea, China, Japan, Malaysia, Vietnam and Indonesia. Owing to close cooperation with big shipping lines, this service can be offered for SOC as well as for COC from and to every port worldwide.

Imports to Uzbekistan are mainly equipment for the automobile industry, car parts, household goods, resins and many more. Export goods are cotton yarn and cotton pulp, textiles, copper, cellulose, fertilizers and so on.

Owing to long-time partnerships and good cooperation with the railway companies selected, InterRail was able to successfully introduce new products and establish new routes in the past year. Today, InterRail mainly concentrates on traffics between China – Europe and China – CIS, Russia and India, as well as on the entire Central Asian corridor, operating its own local branch offices at all major interfaces.