The best result for the last five years: The InterRail Group was able to close 2021 surprisingly well; the situation in global sea transport benefited the Rail segment.

St. Gallen, January 31, 2022. The best result for the last five years: The InterRail Group was able to close 2021 surprisingly well; the situation in global sea transport benefited the Rail segment. But it was not only external factors that favored the business performance.

How well did the InterRail Group get through 2021, we ask Hans Reinhard, Chairman of InterRail Holding AG. “The result was a positive surprise,” is the answer, “especially since we suffered from lockdowns twice in 2020, first in China, then in Europe – and all trains on the main China Europe trade lane were at a standstill for months.” The second half of 2020 then picked up momentum, he says: Large pent-up demand and many shippers switching to rail in the face of closed ports caused a massive increase in China-Europe rail freight.

“We then started the 2021 financial year with this momentum,” Hans Reinhard continues. The situation in the global transport sector was now characterized by new problems in sea transport – total port congestion, container shortages, temporary port lockdowns in China – plus continued pent-up demand – and rail freight became increasingly important as an alternative; China increased the number of train departures, the rail sector grew.

Great performance by all teams

“Our teams in all countries, not just those involved in the China-Europe Trade Lane, did a great job to generate this good result,” says Reinhard, in praise of the employees. Another key factor contributing to the success was the decision taken back in 2020, in the midst of the crisis, to hold on to staff and not “pull the emergency brake”. This is also in line with the spirit of the InterRail Group, which even in the earliest beginnings courageously believed in the success of block trains China Europe.

“The most important thing is to build on the extreme momentum of the previous year, also with investments, for example in new software for block train handling, or with a new start-up in Russia’s Far East and more intensive exploitation of the potential of the markets in Japan and Korea. We want to move forward! Our local managers are driven by ambition – they want to show that we are in the right place as a small fish in the shark tank and can keep up.” 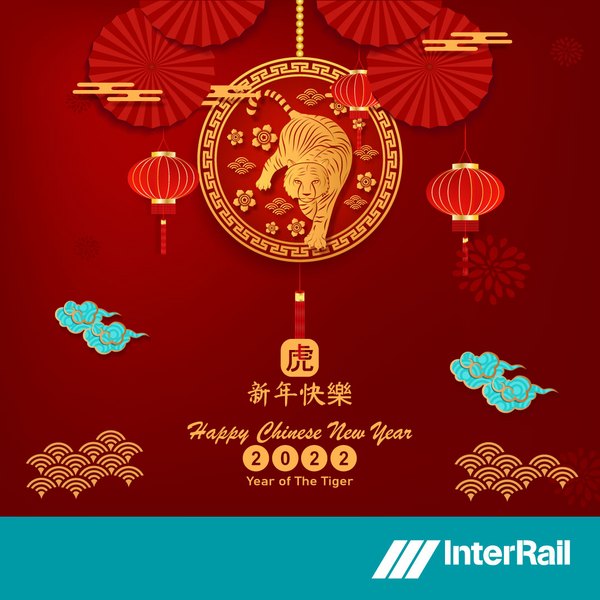 We wish all our customers, partners and colleagues a happy Chinese New Year and would like to take this opportunity to thank you for the excellent cooperations and for the trust placed in our service.